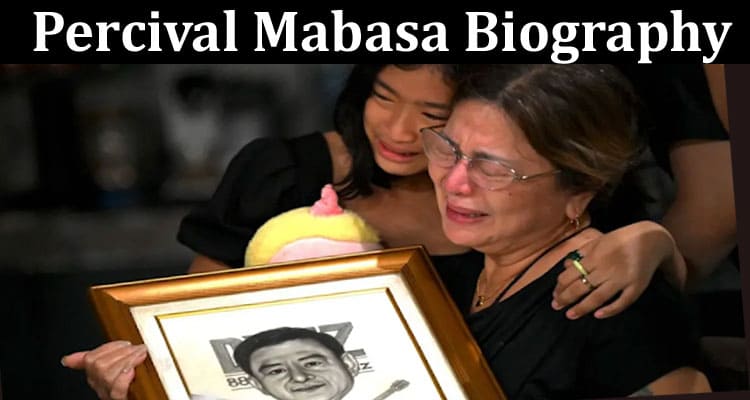 In Percival Mabasa Biography, we will read his Wikipedia, know about him, and explore the reason behind his death.

Do you know who Percy Lapid was? Have you heard the news of Percy Lapid’s death? Are you aware of why he is shot dead? Do you know his Wikipedia biography?

Many people in the Philippines condemned the killing of the radio broadcaster. His family also released a statement demanding justice for Lapid. The investigation is going on, and who is the killer is yet to be identified. We have discussed everything related to him in our post-Percival Mabasa Biography.

This Monday, around 8:30 p.m., Lapid was assaulted by gunmen. He was shot dead at the gate of BF Resort along Aria Street in Barangay Talon 2 in Las Piñas City.

The police investigation identified the victim as a DWBL radio commentator who was in his vehicle. The plate number of the vehicle is NGS 8294. According to them, Lapid’s car was stuck by a white Fortuner when he was about to enter the Resort gate. But before entering the gate, he was shot by another motorcyclist.

They both are the prime suspects in this case. But after the shooting, the suspects managed to run away.

Yesterday the family released a statement regarding the “brutal and brazen killing” of their loving member. His brother Roy Mabasa wrote on Facebook that his family is deeply saddened and angered by the killing of a fearless broadcaster, brother, father, friend, and husband.

He added that we vehemently condemn this heinous crime, which was done not only against Percy, his loved ones, and his profession but also against our nation, the Philippines, and the truth.

Police recovered two pieces of empty shells from the scene. Moreover, they are looking for video footage so that they can identify the suspect.

Is Masaba the first journalist to be killed?

As reported by the Philippines-based National Union of Journalists, Percival was the second reporter to be murdered in the nation after President Marcos entered office by the end of June 2022.

Renato “Rey” Blanco, the radio host, was killed by a stabbing in September 2022 in the central Philippines, many kilometers from the capital. After that, a suspected accused in that incident turned himself into the authorities. However, no accusations have been made, as stated in Percival Mabasa Biography.

Rodrigo Duterte, the former president, had warned of physical abuse against reporters who had written about his horrific anti-drug operation. Throughout his six years in office, a minimum of twenty-three journalists were murdered.

What seems to be the reason behind Masaba’s killing?

The former president, Rodrigo Duterte, who conducted a fatal campaign on illegal drugs, Ferdinand Marcos Jr., and his successor, the son of a deposed dictator, were both criticized by Mabasa, who went by the broadcasting identity Percy Lapid. It seems to be the primary cause behind Masaba’s killing, as stated in Percival Mabasa Biography.

Who was Percy Lapid?

Percy Lapid Real Name is Percival Mabasa, but he was popularly known as Percy Lapid among his followers.

We can better know him from the statement released yesterday by his family. His brother mentioned on a Facebook post that he was a great family man, a nation lover, a father and a dedicated husband.

Percy was well-liked and regarded by both friends and foes, as well as by colleagues. His daring and insightful comments cut through the onslaught of fake news on the radio and social media. At last, his brother demands that his cowardly killers be brought to justice.

He accomplished his elementary schooling in 1968 at Porac Central School, and his secondary schooling was completed in 1972 at Porac’s St. Catherine’s Academy.

Why is there an outrage after Masaba’s murder?

As per media organizations and campaigners, media freedom has been damaged due to the murder of radio personality Percy Lapid. As per the authorities, a well-known reporter from the Philippines was shot and killed while operating a vehicle in Manila, the nation’s capital, Manila. Therefore, media activists and groups denounced the killing, calling it a setback to their freedom.

The fact that the attack happened in Metro Manila “shows how arrogant the offenders were and that officials were unable to safeguard journalists and common civilians from violence,” as the Phillippines’ National Union of Journalists stated. In this incident, the national police swore to carry out law and justice.

Mabasa, better called by his supporters Percy Lapid, had indicted the prominent Philippine politicians of wrongdoing in the harsh radio show he aired for seasons in Manila.

His targeted people included Duterte’s war on drugs and alleged efforts by family members of the Marcoses to change the course of history by depicting the older Marcos. He passed away in 1989 as among the victims of his political foes. You can also read further about Percy Lapid Education in his biography.

Mabasa had recently challenged the present Marcos administration about what he claimed was fraud regarding irregularities in the importation of sugar through a governmental agency.

What are the actions taken for investigations about Masaba’s killing?

According to Hubert Guevara, senior deputy executive secretary, the Marcos administration was apprehensive by the journalist’s murder and had given authorities a mandate to examine how the probe had been handled.

Despite having among Asia’s most liberal press settings, the Philippines continues to be among the most hazardous locations for journalists’ world, especially in its rural regions.

After Percy Lapid Latest News of the death spread, people demand justice for him. #JusticeforPercyLapid started trending on social media.

Note: We are strongly against crime and criminal-like activities. We are writing this post for information, and it is taken from online news articles.

Percy was a fearless broadcaster, a great hero. We also hope that he gets justice and his killers are penalized soon. Many followers of him paid tributes and expressed sympathy for his family. You can read the full news on Percy Lapid here.

What do you have to say about fearless broadcaster, a nation lover, Lapid? Percy Lapid Age was 63 when he died on October 3, 2022. Comment if you also want that he gets justice soon.