How To Negotiate a Personal Injury Settlement After a Car Accident 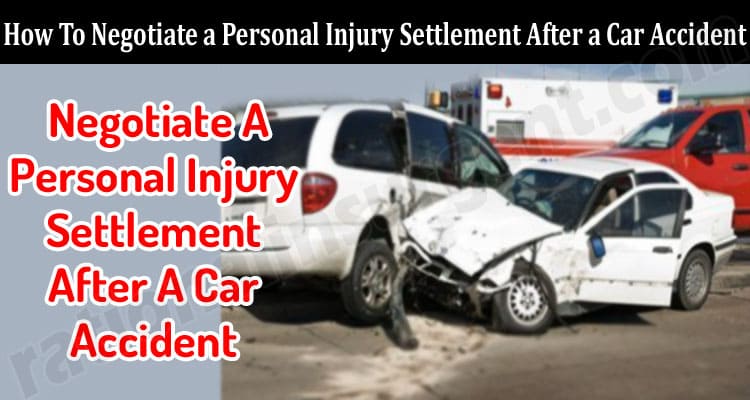 Read the facts on How To Negotiate a Personal Injury Settlement After a Car Accident.

Injuries happen all the time and are mainly caused by accidents. They can occur at home, at work, or in a public space. While some injuries are simple mishaps for which nobody is to blame, other injuries are caused by fault, giving you the right of compensation. Most of these injuries arise from accidents on the road. The likelihood of getting into a car crash is relatively high. Life can change in a second, never to be the same again. You might suffer financial loss due to the injuries or fear of getting in the car again.

Even if you’re not the type who would sue, you might find that a personal injury lawsuit is the only way to make things right. You can pursue lost wages, mental anguish, lost career opportunities, and past/present/future medical expenses. If you’re well advised, there’s a chance your claim will be settled at a reasonable level. In the UK, only 5% of claims go to court before a judge. You should put the accident behind you and move on with your life. The negotiation process consists of a couple of phone calls with the insurance claims adjuster.

It’s possible to obtain a settlement that considers all your injuries, not to mention the pain and suffering you’ve endured. If you want to maximise compensation in your personal injury claim, you must keep the following in mind.

When attempting to settle your claim for damages, you’ll be dealing directly with the other driver’s insurance company. For this reason, you should gather information while at the accident scene. It would be best if you didn’t leave empty-handed. Get the name and contact information of the other driver. It would help if you wrote down their vehicle registration plate number. Having witnesses will make you more credible. To call a witness, you need their contact information. Locating them days or months after the accident can be difficult, if not impossible.

The insurance company isn’t on your side, just so you know. It’s in business to make money. To pursue a successful claim, get your hands on the police report, which will expedite the process. Helpful information is included in the police report: when and where the collision occurred, the parties involved, statements, a description of the property damage, and opinions about who was to blame for what happened. You’ll be able to download a copy once your request has been approved.

The insurance company will send you a letter notifying you that it’s received your claim. An insurance adjuster will reach out to you as soon as possible. The first offer won’t reflect the actual value of the case. If you settle the personal injury case quickly, you agree to take less money than you’re entitled to. Even if the offer is reasonable, it’s still low. You should immediately make a counteroffer that’s slightly higher than the amount you’ve been proposed. It will show the insurance adjuster that you’re reasonable and know what you’re doing.

A negotiation isn’t a lawsuit, but you need the help of a lawyer. Have a lawyer present during the settlement negotiations. They’ll help you overcome areas that might cause trouble and represent you in court if the negotiation doesn’t have the desired results. You can be sure your lawyer will push for the maximum compensation possible. It might be enough to explain the injuries and consequences. The lawyer will negotiate based on your lasting injuries if your case is more serious.

Figure Out What Types of Damages You Can Collect

There’s s a difference between what you think you deserve and what the insurance company is willing to pay. This is why you must have a lawyer evaluate your case. They’ll calculate or estimate your personal injury settlement in the UK. Compensation is designed to make amends for the losses experienced. You’ll receive money as compensation for damages. The damages you can collect for the car accident depend on the specifics of your situation and the losses you’ve incurred. You can collect general damages and special damages.

If you don’t have proof of out-of-pocket expenses, the insurance company will most likely consider you shouldn’t be compensated for that part of the loss. Keep all receipts related to your car accident, including towing services, medical bills, rental cars, and so on. If you had to take time off work, it’s recommended to keep hold of the payslips to show how much money you’ve lost. Don’t take it personally if you’re offered a lower amount than expected. Keep negotiating until you get the amount you’re entitled to.

The other party’s insurance company has no incentive to help you. Actually, they have every incentive to work against you. If the insurer has access to your medical records, they’ll use the information against you. Don’t sign the medical release form. If you do, the insurance company will find out about your pre-existing conditions, find records that undermine your case, and suggest that your injuries aren’t linked to the car accident. Simply put, the insurer will deny payment. You shouldn’t provide any documentation that isn’t related to your accident.

There are certain medical records that the insurance company has the right to see. Examples include x-rays, medications provided, and notes of injuries sustained. Don’t let the insurer snoop into your past medical problems. Never sign anything before consulting with your lawyer first. Your past medical records are between you and your doctor, so you don’t have to authorise just any type of access.

Put The Settlement in Writing

It’s a good idea to put the settlement agreement in writing. It should clearly state the amount for which you settled, what injuries or damages it covers, and the date by which you expect to receive the money. The written document is valid for both parties. If you were tricked into signing a misrepresentation, you have proof. Attention must be paid to the fact that if either party violates the terms of the agreement, the other party has the right to sue and collect appropriate damages.

Things to Think About When Expanding Your Business