Home›New Crypto›Bitcoin›Bitcoin or Ethereum: Which You Should Pick Up To Invest In?
Bitcoin

Bitcoin or Ethereum: Which You Should Pick Up To Invest In? 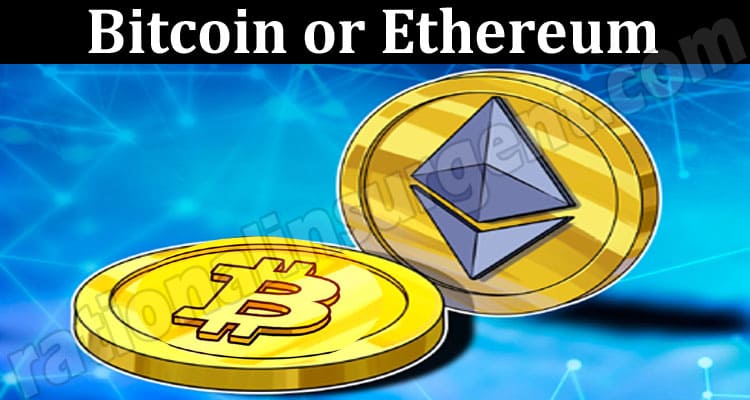 Bitcoin and Ethereum have had a rollercoaster in the field of cryptocurrency. Due to highly volatile markets, both have experienced a massive downturn over a couple of weeks. Nowadays, the price of cryptocurrencies is falling, so it can be a smart opportunity for everyone to buy or invest in Bitcoin or Ethereum because they are more affordable and profitable in comparison to other cryptocurrencies. If you are planning to trade bitcoin, you might consider how has Bitcoin Affected the educational sector.

This informative article highlights important points about investing in Bitcoin and Ethereum, which will be helpful for you in making the right decisions for investment. Read on to know more in detail to know more!

Investing In Bitcoins- Points To Note

In recent years, Bitcoin has gained immense popularity worldwide and is considered the first original and largest cryptocurrency in the world. No one even thinks that Bitcoin will lead the crypto market.

Bitcoin is known to be the world’s first ever cryptocurrency, invented in 2009. Bitcoin sparked a revolution in the field of crypto trading and also set a historical benchmark for all upcoming cryptocurrencies for how to perform in the crypto market.

Bitcoin is based on recently developed technology known as the blockchain technology that allows direct transactions from one person to another without any involvement of a third party. Simply, Bitcoin users can directly transfer their assets from one wallet to another without the help of a middle man. Experts believe that if any cryptocurrency is going to succeed globally, one and only one is bitcoin.

Investing In Ethereum- Points To Note

After bitcoin, Ethereum is regarded as the second-largest cryptocurrency. It was invented in 2015 by Vitalik Buterin, a well-known computer programmer. In layman’s terms, Ethereum is likely similar to bitcoin. P2P transactions are also possible for its users. Ether, the native currency of Ethereum, is also a blockchain-based digital asset.

Ethereum is also a decentralized currency which means no one can own or manage it, just like bitcoin. It provides full facilities to its users to create smart contracts on the Ethereum network so that they can safely transfer their assets without the help of intermediaries.

Bitcoin or Ethereum: Which One Should You Choose?

No matter whether it is Bitcoins or Ethereum, they both have risk factors associated. So, if you are planning to invest in the crypto market, make sure that you can tolerate any circumstance because the cryptocurrency is highly volatile. Its value fluctuates after every single minute.

As we earlier discussed, Bitcoin is a more profitable and widely accepted digital currency than Ethereum. Bitcoin carries a less amount of risk in comparison to Ethereum because they have more recognition and reputation all over the world. In many cases, Ethereum is far better than bitcoin, and it may have great opportunities for growth in the future.

As a direct result of this fact, the benefits and drawbacks of using a certain currency are distinct from one another. Whichever option you choose, make sure that you have done your proper research and also analyze the risk they carried. If you find yourself comfortable with risk, then go ahead with your choice, which can help you make profits.

Cryptocurrencies are highly speculative, and their market is extensively volatile. Thousands of businesses across the globe now accept Bitcoin as a payment option.

P2P transactions are also possible for its users. Ether, the native currency of Ethereum, is also a blockchain-based digital asset.

To say that Bitcoin or Ethereum will take over as the most popular form of currency in the future is a question that is difficult to answer. The name and recognition carried by bitcoin are far more than Ethereum, so if you are making any investment, choose it very carefully.

Investing In Bitcoins- Are They Secure? Should You Invest In Them?