Home›More›How do Solar Panel Work and Their Benefits?
More

How do Solar Panel Work and Their Benefits? 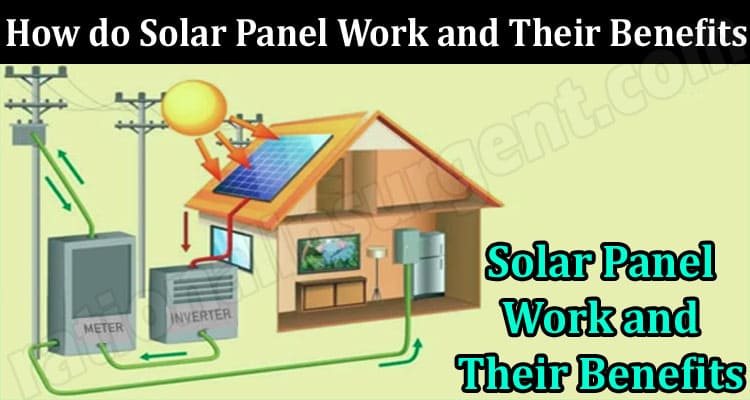 Solar Panel Work: In the modern world, everything runs on energy. Whether it’s light in your house or a light post just outside your house, a television in your living room, etc. electricity is needed in some form to power them.

Electricity is generated in many ways. Most cities rely on electric power plants to get the electricity they need to fuel. Electricity is created in numerous ways, and most towns and cities rely on power plants to generate their electric power. However, in recent years there has been a lot of research on alternative energy. One of the most prominent examples is solar energy and which is gathered using the solar panel. It is an environmentally friendly choice too. The light energy from the sun will be comprised of particles called photons gets converted to electricity which is used for powering electric equipment. The solar panels are used for the conversion of light to electric power.

How does a solar panel work?

Solar panels gather energy from sun rays and then the next step is the conversion of this light to usable electricity. A solar panel consists of solar cells which themselves are made of layers of phosphorous, silicon, and boron. The panel absorbs photons, and this then generates the current.  The resultant energy that has been generated from this will always allow the electrons to be kicked from the atomic orbit and they are sent to the field after the generation by cells. This then pulls electrons that are free now into very freely flowing directional current. The entire process will be called as Photovoltaic Effect. Any average home place will have the enough of the roof area for necessary number of panels so that production of electricity to supply power for all household needs can be done easily. Excess energy generated is stored in the power grid to be used at night.

What are the top perks of solar panels?

The benefits of depending on the use of solar panels for capturing solar energy are a very practical option of producing the electricity. People living in off-grid areas benefit the most. Off-grid very well means that one will be living in an area where there is no electricity supply, generally in rural areas. These areas are not supplied by the grid of main electric utility. Far away homes like remote options and cabins can benefit most from these solar power systems. People can save up on the installation of cabling and poles from the main grid and switch to a more environment-friendly way of living with solar power.

Solar energy is a both clean and renewable energy source. With passing days, we do realize the change in the climate. It is deteriorating. So, it is our responsibility to switch to a cleaner form of energy so that we can reduce the greenhouse effect.  Solar panels have low maintenance costs and there will be no moving parts. They are built ruggedly and if maintained properly can last for many decades.

The benefit of solar power is that whenever the initial installation is done with the initial costing, electricity is produced for the remaining grid’s life span. Which can be around 20 years. You can enjoy free electricity based on the system’s quality. The monthly electricity bills are also something that gets saved up because now you rely on solar power and solar panel. If you less than needed power, you can save up on the excess electricity and it can be sold the utility company as well.

Solar power also allows renewable power resources on the go. They can be used as portable generators, solar backpacks, and portable solar chargers. One can use these devices while outdoor excursions and on a camping trip to get an infinite supply of power for several electronic devices.

Several plants have been set up in the past decades. They are able to use a substantial amount of electricity. Solar power plants utilize hundreds and even thousands of solar panels to generate electricity to be used in different industries.  There are plans of building more power plants in the coming years.

More and more homes across the country are opting for solar energy. Others have solar systems which are for emergency backup for outages. Homeowners sometimes install the power panels on their rooftop or sometimes elsewhere on their property. This powers their entire homes or at least part of them when needed.

Solar panels can be used in agricultural use as well. They can be used to power a variety of small types of equipment and appliances in numerous scenarios. They can use it for water wells and pumps, lighting shades, and numerous other uses.

Solar panels are also used by those who live in remote areas as they may lack access to regulated power grids. Solar power and generators allow them to provide a constant stream of electricity in these remote locations. They also save up on utility bills and faulty services that often can happen while living remotely.

How to Install Solar Panels?

There is a variety of ways to install a solar panel. If the application is for your home use in large wattage capacity, then we need to install numerous panels on the roof. Solar panel mounts are used for this the mounts are of three types: pole mounts, flush mounts, and roof-ground mounts. To install the solar panels on the roof we need an understanding of the roof as well as the home’s electrical circuit. At first, we need to determine the roof side which gets the maximum amount of sunlight during the day, that is to determine which side the roof faces, then determine if there are any obstructions such as tree branches or houses which can cast a shadow on your home. These should be avoided.

So, if you have made up your mind to buy a solar panel, you can check out the solar panel price on loom solar to get a reasonable price. It is one of the leading suppliers in India.