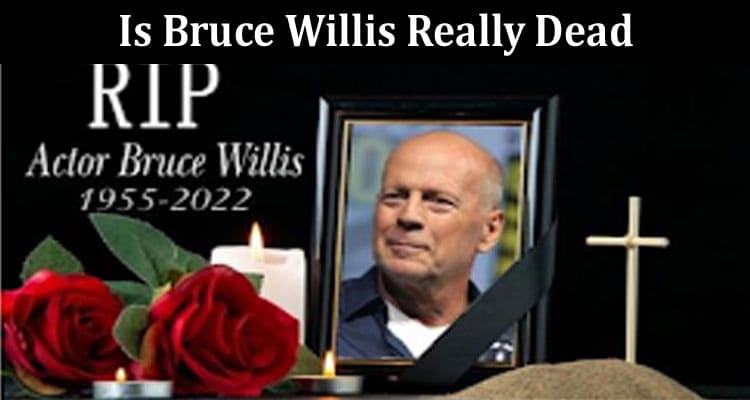 Uncover the truth behind the viral news about Bruce Willis’s death by reading this article on Is Bruce Willis Really Dead?

The fake news about the sudden death of famous Hollywood actor Bruce Willis was spread using Facebook and social media pages. His fans Worldwide were shocked upon hearing the viral news. Why did the news spread? What was the motive for spreading the news? What would be the benefits of spreading such news?

In this article, we bring exclusive facts that show how the internet scam was plotted related to Is Bruce Willis Really Dead?

Yes, Bruce is alive and in good health. We accessed his official social media pages on Facebook, TikTok, and Instagram, which had the latest posts by Bruce. It suggested that Bruce was alive. Furthermore, no official announcement is found on his official social media accounts and Wikipedia pages about ill health (or) death. Neither his family members nor his manager confirmed his death.

Fake news about Bruce’s death a form of scam:

It was revealed that the news originated from several questionable websites that published articles questioning Is Bruce Willis Still Living, including Newsmobile.com, phnomtamao.com, viral72news.com, dailyarabian24.com, news34zone.com, fnews2.com, and gnnews7.com. Evidently, these websites followed no verification process before publishing such a hoax, which questions if the news was intentionally published.

Next, the links from these websites were extensively shared on Facebook, specifically on “FarmVille 2 – Active Players Country Escape” fan pages. These pages were related to the role-playing Android game FarmVille 2. Initially, it gave the impression that fans were discussing the death of a character in the game. But, the details of the game’s characters showed that there are 12 characters, which did not have any character with the name – Bruce. 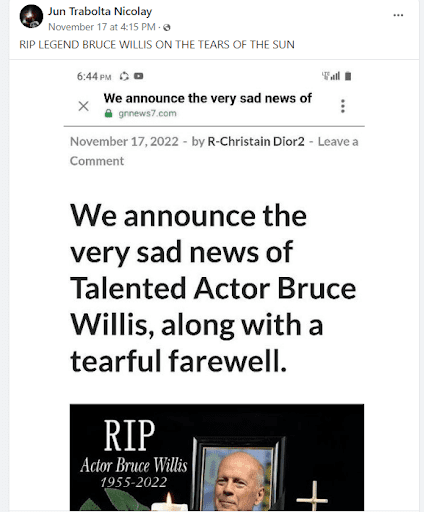 The Facebook pages shared the picture of Bruce, condoling his death on 17th November 2022. The Facebook pages provided links to the pages from earlier mentioned websites. The news spread quickly on the same day, with several other Facebook users sharing the same news, links, and posts. However, the news about Bruce’s death is fake.

The plot behind viral news about Bruce’s death:

Thousands of users, including Bruce’s fans who were curious about the sad news of Bruce’s death, clicked the links on Facebook posts. The website redirected the users to install flash player from a third-party website before reading about Is Bruce Willis Really Dead. It suggested that these websites were trying to install malware on users’ devices.

Born on 19th March 1955, the 67 years old actor Bruce Wills is alive and in good health. The viral news about his death is a scam to install malware on users’ devices who felt a sense of urgency in reading more about Bruce’s death. Users’ curiosity diverts their attention on the viral news and results in ignoring internet threats.

Were reviews of Bruce’s fake death news informative? Please comment below on this article about Bruce.

1Q. What is the spoiler alert about Bruce Willis’s death?

An ebook for Kindle and Paperback was put up for sale on Amazon.com and Rowman.com on 22nd November 2022 that discussed the ending of several films and TV shows, including the death of Bruce Willis in a film.

2Q. Did Bruce Willis suffer from any disease in the past?

Bruce was diagnosed with Aphasia, which affects how a person speaks, writes, and understands.

3Q. What is Bruce Willis famous for?

Bruce is famous for his action-oriented roles in films and as a producer of Thriller and Action genres.

5Q. Why was the fake news about Bruce’s death circulated?

It is a scam plotted by high-tech scammers who want to create a sense of urgency among users to know more about the sudden death of their favorite actor.

6Q. How can you safeguard yourself from internet threats?

Do not click on any suspicious links on the websites and messages. Install anti-virus and anti-malware packages. Never enter your personal and payment details on high-risk websites.

7Q. What is the latest viral news about Bruce Willis’s health?

The hoax and viral news continue to spread. A YouTube video was published on 23rd November 2022 about Is Bruce Willis Really Dead stating that doctors pronounced Bruce dead at 5:00 AM. A picture of his hospitalization was also included, which is fake.