How Did Jeffrey Dahmer Die? Why America’s Worst Serial Killer Only Served 3 Years in Prison 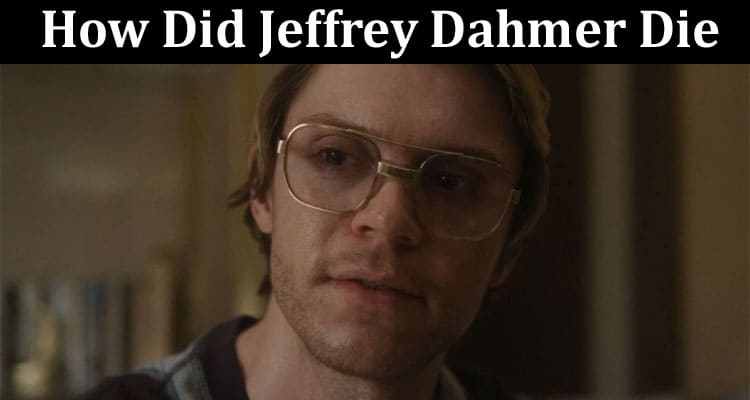 The blog post shares the story of serial killer Jeffery Dahmer and How Did Jeffrey Dahmer Die.

Have you watched the new Netflix series on Jeffery Dahmer, the Monster? The series was released last month and captured attention worldwide because it narrates the real criminal activity committed by a monster in Milwaukee called Jeffery Dahmer.

Jeffery Dahmer was the most horrifying serial killer in America, active between 1978 and 1991. He was a resident of Milwaukee, Wisconsin, who pleaded guilty to gruesome crimes like rape, dismemberment, murder and preservation of human body parts in his apartment. He was arrested and sentenced to 15 years of imprisonment in 1992 and died after serving only three years. So, How Did Jeffrey Dahmer Die?

A new series on Netflix was released that depicts the story of Jeff. The series reveals the crimes and perspectives of the victims and shows the authorities’ failures that allowed a criminal to continue killing and preserving their body parts as mementos for over a ten years. Jeff was also popular by other names like Milwaukee Cannibal. He managed to commit the crimes before being arrested after thirteen years after killing his 1st 1catch names Steven Hicks, in 1978. After he died, all victims’ families believed that justice was served.

How Did Jeffrey Dahmer Die?

After Jeffery was sentenced to 15 years of imprisonment for his gruesome crimes, he was sent to the Columbia Correctional Facility located in Wisconsin. There he met with a co-prisoner, Christopher Scarver. Jeff was beaten and killed by his inmate, Christopher, while serving his punishment on 28th Nov 1994.

Wisconsin – the first American state to take back the death penalty in the year 1853. So, Jeff didn’t get the death verdict after such gruesome crimes. Christopher was serving 25-year imprisonment for the armed robbery and murder case. He was also sentenced in 1992. So, it is clear Who Killed Jeff Dahmer In Prison.

Reports confirm that Jeff spent the initial year in prison with high security in protective isolation. Later, the authorities decided to allow Jeff to stay with a population of 662 inmates. One of the inmates made an unsuccessful attempt to kill Jeff in 1992- July using a knife of plastic. He attempted to slash his throat, but he failed. Jeff and other inmates had no injuries from the attempt and believed it was an isolated incident.

Jeff was popular in prison for taunting and upsetting his fellow inmates. Christopher confirmed that Jeff used to taunt the inmates with the food served in prison. So, How Did Jeffrey Dahmer Die finally?

Christopher soon realized Jeff had crossed the limits with the inmates and prison staff. He started to steer clear of Jeff after his misbehaviors. On 28th Nov 1994, Christopher snapped him, took a metal bar from the weight room, and interrogated him for his crimes. Jeff admitted all his crimes, and with the metal bar, Christopher hit his head twice, and the skull crashed, and Jeff died after one hour of reaching the hospital. He died at the young age of 34. Jeff finally died, and Christopher put Jeff’s head down after killing him. Hopefully, it is clear How Did Jeffrey Dahmer Die in prison.

The Sister of Jeff’s last victim, Rita Isabell, said that she had anticipated his murder after he was pronounced dead. She confirmed to the media channel that for the last two years, she had received calls from the prison who promised to take care of Jeff.

How Was Jeffry Dahmer Caught?

On the night of 22nd July 1991, Jeff was arrested by the Milwaukee Police. Jeff hired three men for $100 and asked them to pose without clothes for pictures. But these were not the people Who Killed Jeff Dahmer In Prison.

One of them, Tracy Edwards, agreed and went to his apartment, where he noticed bottles of hydrochloric acid, a foul smell and other disturbing items. Jeff tried to handcuff Edwards, but he only control to safe one hand and forced him to remove his clothes for the pictures.

Edwards managed to escape from his apartment after five hours of struggle. When Jeff tried to stop him from escaping, he punched Jeff in the face, making him lose his control. Edwards fled downstairs to find two police officers, and he narrated that a freak was after him with a knife. So, How Did Jeffrey Dahmer Die?

He was not killed at his apartment; he was arrested and sent to prison, where he was murdered. Edwards escorted the police to Jeff’s apartment. The police officers were shocked after seeing the Polaroid pictures of human body parts, assorted heads in the fridge and skulls on his table. When officers were discovering things, Jeff tried to attack the officers to escape and resist the arrest. But the police controlled him and pinned him to the floor, and finally, they took him to the police station without uttering a word. So, Christopher is the man Who Killed Jeff Dahmer In Prison in 1994.

Later, a team from the Criminal Investigation Bureau reached Jeff’s apartment for investigation. They were shocked at the four assorted heads, seven skulls in the bedroom, blood dripping from the fridge and other gruesome evidence. They also recovered two human hearts. The tem also found a whole torso preserved in his fridge. The chief examiner finally said that investigating Jeff’s apartment is more like investigating someone’s museum than a crime spot. They were shocked after discovering the things.

As we all know by now, what happened to Jeff after he was arrested in 1991 and How Did Jeffrey Dahmer Die? Let us check out his confession in the courtroom. Jeff confessed in his first hearing that he seduced, killed, murdered and dismembered around 17 people, including boys and men. Jeff encountered a 60-hour of police interrogation after he was arrested and bought to the police station. Jeff not only confessed what he had done but also relinquished the right to have an attorney for his defense.

In the interrogation, Jeff didn’t hesitate to confess what he had done. He explained all his crimes, activities and the methods of killing his victims. But, How Did Jeffrey Dahmer Die in prison is different.

When asked why he killed them, he said that he killed the victims not because he was angry or hated them but because he wanted them to be with him forever. So, gradually his obsession increased, and he started to preserve the body parts. He also confessed that the urge to kill, dehumanize, and see victims as objects had not grown overnight; it occurred slowly. Later, he was diagnosed with psychotic, schizotypal, and borderline personality disorders. Despite all these disorders, he was considered to face the trial and death penalty. But, How Did Jeffrey Dahmer Die differs from what he has done with the victims.

Initially, Jeff pleaded not guilty to the 15 murders on 10th Sept 1991. Later in Jan 1992, he pleaded guilty, eradicating the need for a criminal trial; however, the proceedings focused mainly on his sanity. Finally, the judges sentenced him to 15 years of imprisonment. But justice was served after Christopher killed him in 1994. Unlike other criminal trials, the decision of Jeff’s case should not be unanimous. So, he was sentenced to 15 years without the death penalty. But, How Did Jeffrey Dahmer Die in prison is a different case.

Out of 12 jurors, 10 must agree to the mental state of the criminal before pronouncing him guilty. Jeff has already confessed that he knew that all his crimes were wrong, but he didn’t have control over his mind during the crimes. So, by pleading insanity, Jeff would have to prove that he was insane when he committed the crimes. For three weeks, jurors heard and discussed the case and concluded that Jeff was sentenced to 15 years. For more updates on his story and to know How Jeffrey Dahmer Died, please check out the new Netflix series.

How Did Jeffrey Dahmer Die – FAQ!

1 – How Did Dahmer Actually Die?

Jeff died while serving 15 years of imprisonment and was killed by one of his inmates in prison.

He was  executed in prison’s electric chair.

3 – How Many Years Did Dahmer Get?

4 – How Old Was Jeffrey Dahmer When He Died?

His lq was 136 that was considered to be moderate.

He was a chemist.

8 – Is The Electric Chair Painful?

9 – How Did They Catch Dahmer?

The police raided his apartment and caught him.

10 – What Did Jeffrey Dahmer’s Mom Have?

She founded an HIV community center with name “The Living Room”.