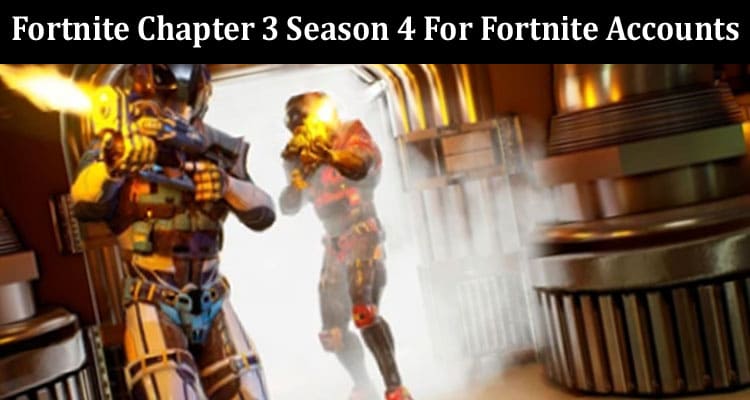 Everything that is coming to Fortnite’s Paradise update.

Fortnite’s Chapter 3 Season 4 has been released and it comes with a bunch of new changes. It is ironically named Paradise, based on the trailer, it is anything of the sort. We will get to it shortly, but there is a new item that could change how the build meta is played. The new season will also introduce some map changes that feature higher elevations. Also one of the biggest changes is the balancing done to sniper rifles. A lot of players are going to be picking up snipers again.

So, let’s dive into everything that is coming to the new season.

Let’s start with an interesting item that is coming to the game. The Chrome Splash is a unique grenade-type weapon. You can throw it at objects or splash it on you and the surrounding area. If you turn yourself chrome, you can do a lot of different things. Sprinting will turn you into a chrome blob. You take no fall damage, move quicker, and gain an air dash while in this form. More importantly, using this air dash, you can move through walls with it. This item is looking to be very useful for any situation and all players should try to have one in their inventory.

New Weapons and A Slide Kick

Everyone loves new weapons! This season features two major weapon additions. The EvoChrome Shotgun and EvoChrome Burst Rifle. These weapons have a unique mechanic that works differently compared to other weapons. First, you have to find them in Chrome Chests, they don’t appear in regular chests. Of course, you can always loot them from an enemy.

Also, you can now perform a Slide Kick. Nothing special about it, slide into them and knock them back a bit. This could be a great maneuver to disrupt your opponent or give yourself some space.

The new update introduces some new points of interest and some changes to some areas. For example, Condo Canyon is now a floating city. All of the buildings are now on floating platforms, changing the map’s dynamic. Herald’s Sanctum is a completely new point of interest. It looks very minimal, but also high-tech and alien-like. Beware of the Herald atop the fortress.

If you are feeling bold to take on this powerful NPC, be sure there aren’t other players around. They may try to kill you while you are distracted. However, if you do kill her, she will drop some useful items and a legendary weapon to pick up. She has some tricks up her sleeve though. Watch out for her spells and the ability to summon chrome wolves in battle.

This is honestly probably one of the biggest changes in this update. All Sniper weapons have had their damage increased. But wait, there’s more. A lot of snipers also got their headshot multiplier damage increased as well. If you happen to be a crack shot, then picking up a sniper is your main play. The slow, but powerful snipers can now one-shot enemies if you get a headshot. Zero build players better beware, your session can end early.

As always, a new season means a new battle pass and it includes a bunch of cosmetics to collect for your Fortnite account. There are going to be new skins in the Fortnite Item Shop as well sometime this season. Anyway, the battle pass includes a variety of skins, banners, and back blings. Most importantly, it has Spider-Gwen. If you want Spider-Gwen, you will need to reach the end of the battle pass. Completing weekly and seasonal quests are the best ways to get XP for Fortnite accounts.

There is a lot to do and a lot of changes this season. Fortnite’s Paradise is looking to shake up the gameplay a little bit. The ability to go through walls with the Chrome Splash is a massive gameplay feature. Players also gain access to some new weapons. The sniper rifle balance changes are sure going to bring them into play more. Pro players are likely to use them a lot more. With a new battle pass that has various cosmetics for Fortnite accounts like Spider-Gwen and new areas, players will see a lot of things have changed.