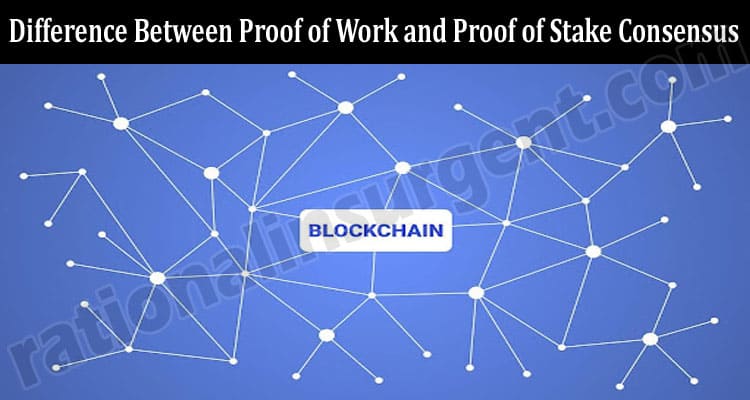 The cryptocurrency community or network is a digital currency network that functions under a ledger known as the blockchain. The blockchain holds a record of the cryptocurrency transactions arranged in an orderly and sequential manner; this arrangement allows tracking each user so they don’t spend their holdings twice. Once the ledger is distributed, another version will be rejected to keep the blockchain as secured as possible. Bitcoin, one of the most profitable cryptocurrencies, as pointed out by Cryptomaniaks, runs on one of these protocols. Let us see what these protocols entail.

The Proof of stake (PoS) consensus/concept is a concept that allows miners to analyse or mine blockchain transactions based on the number of coins being held. This means that the more the coins held by a miner, the more their ability to mine or the more their mining power.

The proof of Work (PoW) consensus is a system that helps prevent inappropriate use of computing power. The PoW consensus, when used by cryptocurrency networks, allows them the opportunity to scrutinize the work done and submitted to receive rights to add new transactions to the blockchain. This article will give you a proper understanding and breakdown of how the POW and POS consensus works and their variations.

Difference between Proof of Work and Proof of Stake Consensus

The POS was initially created as a substitute for the POW consensus. The POW consensus was the preceding algorithm in Block-chain technology, and it is used to confirm transactions and increase the Block-chain length. The Proof of work consensus was created not to replace the proof of stake concept but was created as an alternative. PoW is a decentralized consensus mechanism created to allow members of the blockchain system to solve issues and restrict intruders from ruining the system effortlessly.

After being created as an alternative to the Proof of stake system, the Proof of work consensus is mainly used in the cryptocurrency sphere for mining. Proof of work forms the basis of many other cryptocurrencies as well as allowing secure and decentralized consensus. The PoW concept is also used for validating transactions and mining new tokens. At the same time, the Proof of Stake allows these miners to mine and validate transactions while considering the number of coins the miner has.

Naturally, the proof of work consensus requires a lot of energy and resources, which puts the miners in a position to sell their coins to pay up for some of the expelled resources. The proof of stake gives mining power based on the number of coins the miner possesses. Therefore the miners can create a balance while making use of the proof of stake consensus. This is a big difference that influences the choice of miners when choosing between the PoS or the PoW.

The proof of stake consensus is a safer option as miners cannot attack the intended system, and even if miners can manipulate and attack the network, the attack is not as helpful as they wish it could have been. The PoS has limited miners’ compensation in a way that is not as beneficial.

While the proof of stake consensus is highly effective as regards security, the proof of work has allowed cryptocurrency transactions to be swiftly processed between individuals without the presence of a trusted third party. The proof of work requires a lot of energy and resources, but this is easily balanced out once more miners join the network.

Over the years, the pattern for discovering if the blockchain has been tampered with was through “hashes”. Hashes are a long series of numbers that serve as proof of work; only one hash can ever be generated from any given hash function. Proof of work compels all miners who use it to solve a complex sum, and the winner is selected by how powerful your hardware device is. But with the proof of stake consensus, a winner is randomly picked without any complex examination; the winner is determined based on their staked amount.

Both the Proof of work and proof of stake consensus is equally beneficial to every cryptocurrency network. They both have different benefits and flaws, but depending on the method of mining, a suitable consensus can be chosen. It is advisable to discuss with experts and get adequate information before settling for one.

The proof of stake model was explicitly created as a solution to some problems of the cryptocurrency industry. Though the Proof of Work consensus is a way to mine many cryptocurrencies, you should identify the flaws and avoid them. Both the POS and The POW consensus have flaws, but as the blockchain technology gets better, there are more ways to maneuver these flaws.